Commissioner of Police urges public to campaign with safety in mind 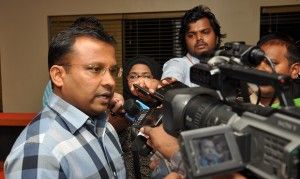 The Commissioner of Police has urged the members of the public to put safety first when campaigning for their respective candidates who are to take part in the upcoming Presidential Elections.

In an interview given exclusively to DhiTV, the Commissioner of Police stated that individuals closing off roads to do their campaigning should get the appropriate permits from the relevant authorities and to take care to use the equipment as professionally as possible.

He also stated that the Police were ready to provide security for any and all individuals who request for it during their campaigning.

Additionally, he also requested that the campaigners take care not to disturb the pedestrians and the traffic flow when putting up banners and flags, adding that sometimes, the pedestrian’s life might be at risk if they get entangled in the ropes or wires used to hang the flags or banners up.

The Commissioner went on to state that though the Maldives Police Service was, is and will be preparing to maintain peace and stability during the election days, the public should also do their part to maintain order.

He continued, stating that all the political parties of the Maldives and relevant institutions should work towards the same end.

He also stated that if for whatever reason, the voting process comes to a halt, it should not be seen as a failure, solely on the Maldives Police Service’s part.

The Commissioner of Police also stated that the aim of the Police is to prevent conflict before, during and after the elections on an operational level, adding that public awareness is increasing on such issues.

Lastly, he stated that a National Coordination Committee has been established with representatives from the different political parties and relevant institutions so that even if an issue arises, it can be handled within the committee using diplomacy rather than out on the streets.