Police Officers leave for the islands for Presidential Elections 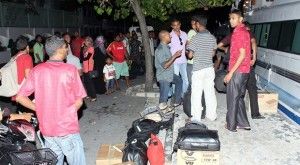 Police Officers have left today for the islands under Operation Blue Waves; an operation that started on 15th August to make this year’s Presidential Elections proceed as peaceful as possible.

Launch no.19 of the Marine Police left at 0530 hours with Officers to be deployed from Thaa Atoll to Addu City.

Launch no.20 of the Marine Police left at 0900 hours with Officers to be deployed at Meemu, Faafu and Dhaal Atoll.

Launch no.20 will first travel to Dhaal atoll and after deploying Officers in the atoll, will transport Officers completing the Police Recruitment Training Course at Dh.Vaanee, to Male’, to be deployed in north atolls of Male’.

The Launch will leave to northern atolls from Male’ at some time tomorrow.

A large number Officers will take part in the operation, in both Male’ and the atolls, during the Presidential Elections.

The Maldives Police Service would like to thank the public for their cooperation to Operation Blue Waves.