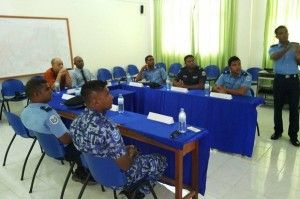 The Commonwealth Consultant who is currently in the Maldives to monitor the work done to ensure peace and security during the coming Presidential Elections, Mr. Eldred de Klerk has travelled to Addu City and met with the Officers working in the South Police Division.

The meeting took place yesterday morning in the AV room of Addu High School and was about the status of Addu City with relation to the elections to be held on the 07th of this month, along with the work to be done with the Elections Commission.

The information was provided to Mr. de Klerk by the Commander of the Addu Police Division, Chief Inspector of Police, Ahmed Shifan.

The presentation given by the Chief Inspector covered the political climate of Addu City, obstacles faced by the Police while providing vote security and some important aspects of the Election Security Plan, along with the work done by the Police to work with everyone to ensure that the elections are peaceful.

After obtaining information on the South Police Division, Mr. Eldred de Klerk spoke on ways to prepare for the coming elections from a broader scope.

The meeting was also attended by the Head of the Divisional Operations Command, Assistant Commissioner of Police, Farhad Fikree, Commander of the South Police Division, Chief Inspector of Police, Ahmed Shifan, the acting-Commander of Addu City, Police Station Inspector, Mohammed Hassan and some other Officers in charge of the station.

Following the meeting, Mr. de Klerk also visited the South Division Stations to meet with the Officers stationed there and to survey the technical capabilities of the stations.